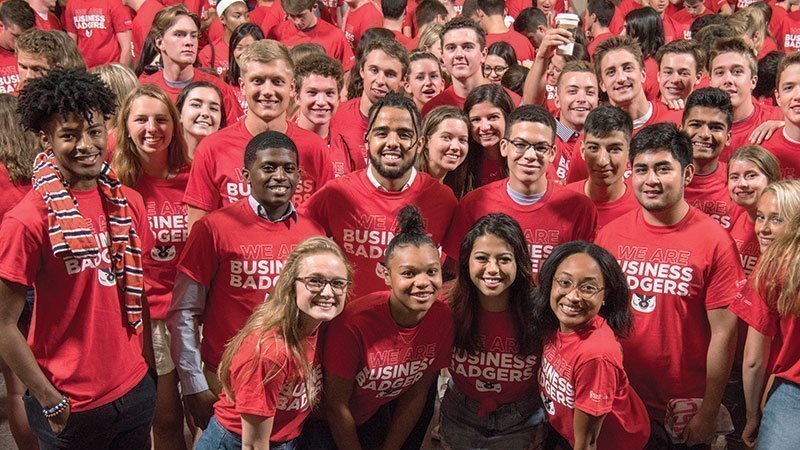 A petition to implement a multicultural space in the Wisconsin School of Business was started about a month ago by UW Sophomore Nalah McWhorter.

Before becoming a Business Emerging Leaders (BEL) scholar, McWhorter grew up in Racine, WI and was accustomed to seeing Black people on a regular basis at her school and in her neighborhood. She dreamed of coming to the University of Wisconsin-Madison. She dreamed of studying in Grainger Hall, but soon became isolated by the white male dominated culture of the Wisconsin School of Business (B-School).

“It’s not somewhere that I feel comfortable, safe, active and ready to learn,” McWhorter said. “I know if I feel that way, I’m sure there’s a lot of other people that look like me that feel that way who walk into that building too.”

Tavares Adams is one of those people. From selling candy in high school to developing a love for numbers, Adams has always had an affinity for entrepreneurship. Adams is a fourth year student from Racine and majoring in Finance and Accounting. The PEOPLE Scholar has been on UW’s campus since his sophomore year of high school. He has a catalog of experiences of feeling outcasted and alone in the B-School. The typically extroverted Adams struggled to find a support system within the school and continues to be drained by the feeling of being invisible.

“All of my friends are outside of the B-School,” Adams said.

Despite Adams’ work ethic, he hasn’t had many fulfilling relationships within the B-School. All of his advisors are white and he feels like they don’t understand him. He believes a multicultural student space would change that if the B-School would make it a priority.

“They don’t care about me,” Adams said. “If it’s not a keynote speaker, a business org, or something relating to higher education of the financial sector, the Business School really doesn’t care.”

As a former academic advisor in the department, Karen Thomas was very committed to supporting students from underrepresented identities. Thomas has been through the UW school system gauntlet, attending and working at UW-Whitewater, where she majored in Psychology and Human resources and UW-Lacrosse, where she received a Masters in Student Affairs Administration and Higher Education. Through all of this work, her eyes opened up to the similarities she shared with students of color she developed relationships with.

“It would not be abnormal for me to walk around Grainger and not see somebody that looked like me in a day,” Thomas said.

Scrolling through the extensive B-School Faculty and Instructor Directory, there were three Black people  listed, all of whom were PhD students. According to Thomas, Grainger and the B-School are aware of their issues with representation and are working to improve their environment.

Thomas mentioned that Binnu Palta-Hill, the Assistant Dean for Diversity and Inclusion in the School of Business, is invested in improving life in and out of the classroom.

Listening and supporting aggrieved students should be a priority, if the Business School intends to promote and value diversity and inclusion.

“If you don’t have an institution that supports you, the 40,000 kids here aren’t going to give a f— about you either,” McWhorter said.

Maya Smithson, a senior studying Marketing and LGBTQ+ studies, works with McWhorter as a Career Peer Coach, helping students develop their resumes, cover letters, interviewing skills and more. From Long Beach, CA, Smithson is a Posse Scholar who grew up with diversity and felt like the script flipped on her when she got acclimated to UW-Madison.

Smithson developed a group of Black friends during her intro courses, but after her first year, she began to get into her major and saw the divide within the student body. Her comments were overlooked in class, students would purposely move away from her section, and professors would invalidate her experiences. Despite the erasure she dealt with at the B-School, Smithson has been grateful for opportunities to speak up for herself when she knew no one else would.

“I have learned how to be a demanding presence and to assert my voice where I feel like it’s needed,” Smithson said.

McWhorter’s experiences have been eerily similar to Smithson’s. Being the last one to find a group in class because no one would reach out to her and professors putting the responsibility on her to force discussion with students uninterested in what she has to say were common occurences she had to endure.

“I had to force everybody else to feel comfortable. That’s not my responsibility,” McWhorter said.

Thomas strongly echoed this from a faculty perspective that it’s not on the underrepresented students to make these conversations about things they deal with on a daily basis happen.

Thomas has seen how many of the university’s responses to diversity and inclusion have been reactive and has sought to find more ways to take more initiative in her role. Thomas has been able to take the opportunities that were presented to her and values giving back, which made her time as an pre-business academic advisor and co-instructor for Personal & Professional Foundations in Business, the intro B-School course required for all newly admitted students valuable to her students.

“I was very much interested in figuring out a consistent way that we can have conversations with our students to hear what their needs are, to hear what’s at the forefront of their minds, and do it in a way that’s proactive so that when things do come up, we’re able to tackle them as a community,” Thomas said.

Nick Loden, a senior triple majoring in actuarial science, risk management insurance, and management and human resources, works in the B-School alongside Smithson as a Career Peer Coach and spends about 20 to 25 hours per week inside the halls of Grainger. His experiences at work opened up his eyes to the struggles of people from underrepresented backgrounds. Loden works within his office to focus on being more inclusive and developing more accessible services for all students.

From Menomenee Falls, Loden sees more diversity at UW-Madison than where he grew up, but understands the university’s facade when it comes to diversity. He felt that the intro course Thomas used to teach provided a holistic approach to preparing him for the B-School. However, he’s seen the lack of inclusion and the nature of competition fuel the B-School more than community.

“It really is a ‘man-eats-man’ type of mindset in the School of Business. You can walk in there and feel that everybody’s out for themselves,” McWhorter said.

Thomas’ work teaching in the B-School attempts to break down these barriers and implement community within the classroom. However, since her departure, she worries about the void she left as a Black staff member..

“I really just feel out of place,” McWhorter said. “I do feel like I belong here, but I just don’t feel at home on this campus if I’m not in the BCC.”

Although some students might not feel included, they are included on the posters and pictures hanging in the school. The big wall in the middle of the first floor of Grainger features a colorful display of students throwing up the “W” sign. According to Adams, that photo was photoshopped together and the students were not notified of where the pictures were going.

Some posters actually feature  recent graduates who worked in the B-School as student employees and who Smithson is very close with. Anthony Wright was one of the former instructors in Thomas’ course and a Career Peer Coach. He became one of Smithson’s mentors and guiding hands thoroughout her B-School journey.

“He started being someone I could go to a lot,” Smithson said. “If I was having a stressful day or someone said something stupid to me in class, I could just vent to him.”

Wright was one of the very few instructors of color Smithson had in the B-School, but he had a huge influence on her. It took Smithson a while to come into her own and feel like she belonged in the B-School. Yet, artifacts of diversity do not compensate for the actual realities students like McWhorter, Smithson, and Adams face on a daily basis.

Loden believes the proposed multicultural space would be beneficial to changing the narrative and the white male dominated culture in the B-School. While he is comfortable and hasn’t personally seen the impact the B-School has had on students from marginalized identities, he knows that it’s important to be intentional in providing a better experience for students to come.

“The School of Business does a lot of talk around diversity and inclusion. However, there’s not much that’s changing as far as the overall culture and atmosphere.” Loden said. “I think this would be a step in the right direction to do more than just talk about it, but actually show that it is important to the Business School and their values.”

Whether the space becomes a reality or not, McWhorter believes this will spark a discussion and shed a light on the Business School’s true commitment in changing the culture. McWhorter is aware of the current urgency for the space, but wants to leave something behind to support future students and leave a legacy to establish a tangibly more inclusive culture going forward.

Grainger is a subset of the campus. The Business School’s influence is undeniable with the future leaders of huge corporations and politicians walking these halls, but the issues within the culture are equally undeniable. McWhorter’s petition is still circulating on social media and nearly at 1,000 signatures. While the answer to making UW-Madison feel like home for students from marginalized identities requires institutional accountability and restructuring, a multicultural space in the School of Business would certainly be a step in the right direction.

Nile Lansana is a rising Senior from the Southside of Chicago, IL, attending the University of Wisconsin-Madison. He is double majoring in Journalism and Creative Writing. Nile is an award winning poet in his own right as well as with Rebirth Poetry Ensemble, which is an artist community focused on uplifting youth with writing and performance through the lens of social justice. He is a First Wave Scholar, repping the 11th Cohort. View all posts by Nile Lansana