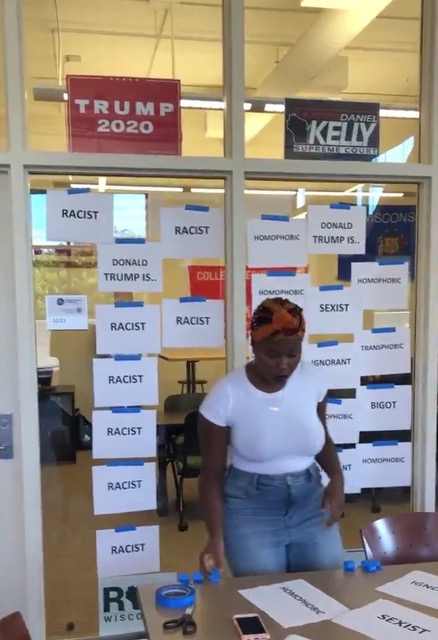 In Response to “in complete hysteria”

This statement is from the individual and does not represent the Student Activity Center or ASM as a whole.

I was working at the Student Activity Center when I witnessed the incident between Jasmine Kiah and the College Republicans on October 9, 2019. In a peaceful protest, Kiah put “Donald Trump is “Racist,” “Sexist,” “Homophobic,” “Transphobic,” and “Bigot” signs on the conservative organization’s office windows. The College Republicans have had our front office since the start of this school year and have Trump signs hanging in their window along with a Trump poster and cut-out that are visible to anyone studying in the front of the 3rd floor of the SAC.

Jasmine Kiah was calm, respectful and resolute in her protest.“Intolerant” and “in complete hysteria” are gross mischaracterizations of Kiah’s behavior motivated by racism and sexism from the College Republicans. Kiah didn’t pose any harm to the Republican students’ safety and was never aggressive with anyone unlike the false narrative the GOP Badgers have been putting out on social media platforms.

Kiah walked in the SAC, started playing “FDT” by YG ft Nipsey Hussle, and began putting the signs up with tape. She didn’t say a word to anybody until they approached her. While she was putting the signs up, two white students came up from studying and asked to help Kiah put up the posters. Kiah gladly accepted the help. Yet, Kiah was the only one ostracized for the protest.  The two white students who were in the College Republicans office apparently felt so unsafe by Kiah that they called their org president to come address Kiah instead of going out of the office and talking to Kiah themselves.

All she had was music, tape and paper. There was also an entire wall of glass between them and Kiah never made any attempt to speak to or approach them. I feel that the descriptions of the incident from the GOP Badgers have been purposely skewed to taint Kiah’s character and are inaccurate of Jasmine’s behavior in the moment. As an employee of the SAC, many students have come up to me and expressed their concerns and unsafe feelings studying with a symbol of hate right in front of them. I felt uncomfortable myself having to work next to that display as a Black man who is not for any -isms or -phobias.

Once the College Republicans’ president approached me and the SAC manager about the situation unfolding, he began recording Kiah without her consent. This is the moment showcased in the video that’s been spread over social media. After approaching Kiah, my manager made a call and told me that the police might need to be called. I didn’t want that happening, so I brought Kiah aside to talk with my manager. My manager explained the situation, and Kiah went back, finished hanging the final few signs and left. The College Republicans organization president walked into my manager’s office visibly upset about the situation and said his org members felt unsafe.

I then brought up the fact that hundreds of non cis white people have walked into the SAC every day and the first thing they see is a symbol of hate and divisiveness whose rhetoric and policies have enacted violence on their personhood and communities. He replied with, “That’s your opinion” and left after getting my manager’s number. Rather than being open for civil discussion as the College Republicans have stated, their president shut me and my perspective down in front of my manager. While Kiah was only against SAC policy for hanging up the signs on an office without permission, she does have the right to protest and has cooperated in her hearing with the administration.

While one can have their political views, one cannot be objective about or ignore how Donald Trump’s rhetoric aligns with racism, sexism, transphobia, homophobia and bigotry. While the College Republicans can have their stance on politics, they cannot be ignorant to what the candidate they are supporting is about. If Kiah putting those signs up offended folks, including the state senator of WI, more than Donald Trump talking about grabbing women “by the pussy” or separating families at the border among other heinous statements and violent acts, I feel that the College Republicans need to take a deep look at their values.

Nile Lansana is a rising Senior from the Southside of Chicago, IL, attending the University of Wisconsin-Madison. He is double majoring in Journalism and Creative Writing. Nile is an award winning poet in his own right as well as with Rebirth Poetry Ensemble, which is an artist community focused on uplifting youth with writing and performance through the lens of social justice. He is a First Wave Scholar, repping the 11th Cohort. View all posts by Nile Lansana